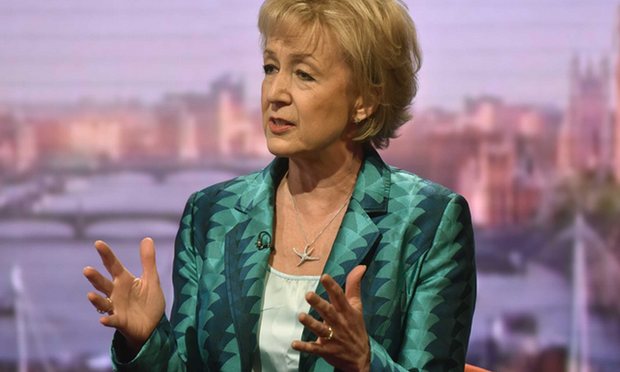 The more I see Brexit’s Andrea Leadsom, the more I am reminded of Carly Fiorina (the US business leader who forced the HP acquisition of Compaq, and more recently attacked Hilary Clinton and Planned Parenthood in a particularly unpleasant way). She has the same unshakeable belief in herself, the same glossy self projection, layered over a potentially disastrous master plan. And it appears, the ability to dissemble on an industrial scale. Carly however only did for Hewlett Packard. Andrea can destroy a much bigger target. There are it has to be said, many many dumber and more treacherous men in the Tory ship of fools at the moment, but I have seen that manic glint in Andrea’s eye before and it’s a look that spells danger.  Let’s look a little more closely at her. 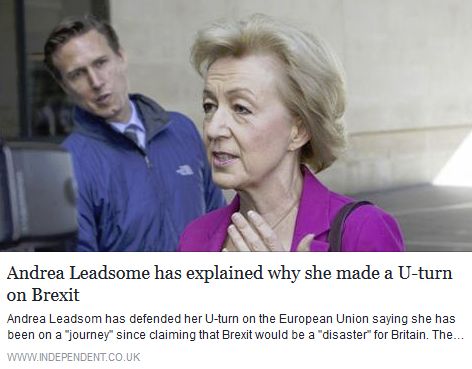 Firstly she has only been for Brexit for 3 years.  In 2013 she said: “I don’t think the UK should leave the EU. I think it would be a disaster for our economy and it would lead to a decade of economic and political uncertainty at a time when the tectonic plates of global success are moving.

“Like the rise and fall of the Roman and Greek Empires we are seeing the rise of the Asian and South American economies at a time when our own future is less certain. And to be honest economic success is the vital underpinning of every happen nation. The well being we all crave goes hand in hand with economic success.”

Her justification for the Brexit U-turn is that she concluded over the intervening 3 years that the EU could not be reformed. But EU reform has nothing to do with the damage to the UK of exiting the EU. None of the UK exit options have changed in the last 3 years. All that has changed is her rise up the Conservative hierarchy.  Which as we will see below may have been fueled by a rather sinister source. 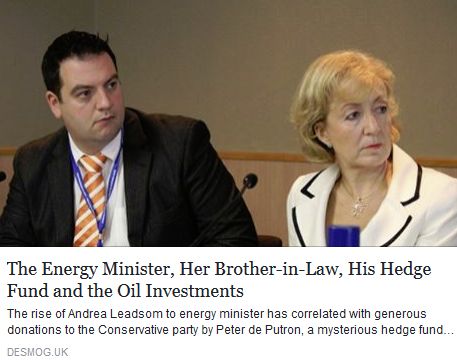 As has been widely reported (see link to the left), “An offshore financier who is the brother-in-law of financial services minister Andrea Leadsom has donated £816,000 to the Conservative party since she first successfully ran for parliament at the last election.”

The offshore financier is Peter De Putron, a very shadowy individual who is based in Guernsey.  Andrea Leadsom was Managing Director of De Putron Fund Management between 1997 and 1999.  De Putron’s wife, and Andrea Leadsom’s sister, Carolynne Hayley de Putron,  is currently head of investor relations at De Putron Fund Management.  Mr de Putron wrote out cheques to the Conservative party totalling £200,000 in 2010, £66,600 in 2011, £129,800 in 2012, and £204,760 in 2013.  The  donations from  De Putron were channeled to the Conservative party via a company called Gloucester Research.  This company was run by Andrea Leadsom’s husband,  Ben Leadsom.

In 2014 Andrea Leadsom, 4 years after a deluge of cash was given to the Conservative party by her brother-in-law and husband, was appointed to a junior cabinet position.  The donations were exposed later that year by the “Jersey files” which were leaked from Kleinwort Benson to the International Consortium of Investigative Journalists.  Had this leak not occurred, no-one would have been aware of the massive potential conflict of interest.

Andrea Leadsom made no mention of this in any House of Commons declaration.  Moreover, she has said that she “was not aware of the size of donations made by UK companies controlled by Peter de Putron to the  Conservative party, and has never been involved in any way”….and “has not benefited personally from these donations and does not believe they have affected her career.’

Like many of the large-scale falsehoods from the Brexit camp, Leadsom’s denial beggars belief for many observers.  A company run by her sister and brother-in-law channels nearly a million pounds to her party via her husband over 4 years, and she is totally unaware of it.  The financial manipulations of Leadsom’s brother-in-law are entirely offshore, and largely secret, but they involve a major hedge fund, and investments in oil and other energy assets. His interests are totally at odds with those of the poorly paid in the UK, who Leadsom publicly claims to be driven by.  It is no coincidence that Ms Leadsom currently serves in David Cameron’s government as a junior energy minister (where she supports fracking).  This is precisely the greatest area of interest of her rich sponsor, de Putron. 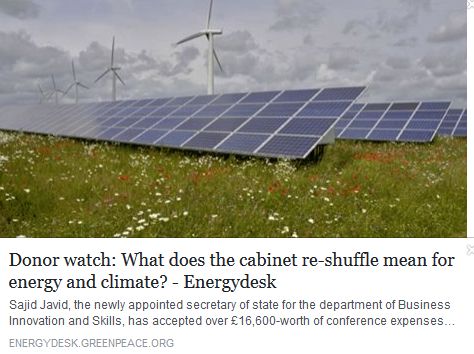 As reported in Private Eye and the Independent, “Leadsom has also received around £80,500 in donations to her campaign and her constituency from her brother-in-law Peter du Putron, according to an Energydesk analysis of Electoral Commission data. The vast majority of these donations from de Putron (bar one, £4,999 in 2010, which was in his name) came through Gloucester Research.run by Andrea’s husband, who also gave £10,000 to his wife’s campaign and her South Northamptonshire constituency in his own name.

A spokesman for Leadsom said: “No member of her family has ever sought to promote her political career”.  This would appear to be a statement so at odds with the published facts that it once again defies belief, even for a Tory minister.

Leadsom’s concern for the little man also is at odds with her personal financial dealings. Separately, Ben Leadsom, her husband, is recorded as receiving offshore loans to grow their business. Three loans from the Channel Islands were used by the Leadsoms through their property company to acquire buy-to-let houses in 2004, plus, in 2006, the couple’s own £1.3m mansion in her rural Northamptonshire constituency.

Her spokesman said Leadsom had not been misleading when she had denied to the Banbury Guardian, her local paper, in April of this year that there was any “offshore element” to their buy-to-let business. The spokesman told the Guardian: “The word ‘offshore’ … is taken to mean tax avoidance. There is not, and never has been, any offshore tax avoidance.” 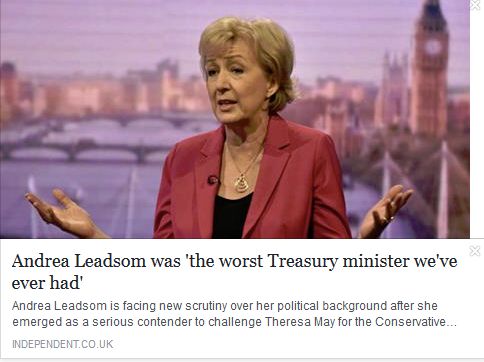 But some say this murky support doesn’t matter – she has years of experience, and is a super efficient top achiever. Perfect for leading the UK into Brexit.  Not so apparently, according to the FT and the Independent: “officials in the Treasury, where she worked as a junior minister from April 2014 to May 2015, have issued an extraordinary criticism of her track record in government. “She was the worst minister we’ve ever had,” one unnamed City official told the Financial Times. “She found it difficult to understand issues or take decisions,” another said. “She was monomaniacal, seeing the EU as the source of every problem”.

So, Andrea Leadsom – a low level, low (ministerial) quality ideologue, possibly influenced by a very rich and shadowy offshore investor, is at the point of leading this country into disaster.  The parallels with Carly Fiorina are quite striking (including the incompetence).  But there is one major difference.  Despite the application of truly huge amounts of money ($22.6m just for her failed California Senate bid) Fiorina has so far failed to obtain any elected office.  It was much, much cheaper to get Leadsom into a position of power – only one million pounds or so seems to have been required.

It seems pretty clear that the sinister sounding Peter de Putron may have acquired himself (through marriage and other means) not just a minister, but possibly a Prime Minister, and one who could promote his interests while championing herself as a supporter of the low paid.  An investment that would make any offshore hedge-fund operator proud.