The Virage digital dashboard display, or VIC or (Vehicle Information Centre) is for us and most other owners a continuing source of problems, and until recently, a totally opaque piece of technology.  Around 2015 our VIC completely stopped working and G had to substitute a replacement speedo/odo to keep it legal.  Occasionally the VIC came on, but the data was usually inaccurate or scrambled.  Early symptoms of a problem are wildly inaccurate odometer readings – again a real problem for insurance or MOTs.

The VIC was designed and built by a Welsh company, Kemitron, which started business in 1981, and stopped trading in 1993.  Attempts to sell the business were controversial and the ramifications are still being felt.  While the VIC design was adequate for it’s time, the company has been defunct for 26 years, and most of the IC components used are obsolete and/or unobtainable and the employees long retired or deceased.

Aston clearly realized the VIC was a poor design, as it was not used on later Virages (after about 1994 G thinks) or on the Volante. For those of us with early models it remains a problem. Some people have fixed the problem by replacing the fuse or cleaning the fuse contacts.  Mattias reports success by re soldering the main connections.  Neither of these worked in our case. Some owners have suggested that there is a backup lithium battery that may have failed.  The problem is there is no visible battery on the main board 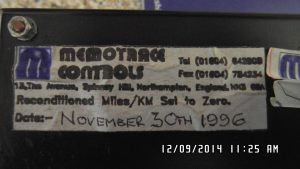 When G first removed our VIC, he found evidence that the unit had been worked on in 1996 by Memotrace Controls who did some repairs. A  transistor, capacitor and a resistor were added for some reason. The additions were attached to what looks like a rectifier, maybe to correct power surges that would likely affect the eprom storing the mileage data.  We chased up Memotrace, which seems to have been a one-man-band run by a Nottingham based electronics engineer called Ray Howard. Sadly Ray has passed away, and until recently we could not find any other source of expertise on the unit.

However, in 2019 one of the followers of this site alerted us to a company that apparently can fix the VIC. This is David Marks Garages, also based in Nottingham.   From an early project to restore a US Lagonda to life, David built an expertise in the VIC system.  Together with his brother, an electronics and design expert, they created a modern upgrade to the VIC,  replacing the CPU ICs and logic, and providing replacement touch panels and screen if required.  This is a Rolls-Royce service at a fairly high price – the repair starts at £2500 + VAT = £3000, and goes up from there if you need the touch panel or screen replaced.  If your VIC is severely degraded, this may be the only alternative.

However,  G has undertaken further work on our VIC, and in a stunning breakthrough, has completely fixed it, with all the original functions working and a reset odo, for a parts total of £5.  To find out what the repair consists of and how to do this yourself,  click the links.

(Visited 265 times, 1 visits today)
I use cookies on this website to give you the most relevant experience by remembering your preferences and repeat visits. By clicking “Accept All”, you consent to the use of ALL the cookies. However, you may visit "Cookie Settings" to provide a controlled consent.
Cookie SettingsAccept All
Manage consent