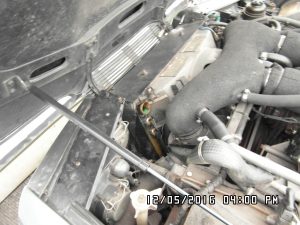 y a fellow Virage owner thought he might need a new radiator due to a leak from the bottom corner of the radiator unit.  G went to have a look and found a wet patch originating from the cooling fan switches at the top near side of the radiator.These are thermal switches, which trigger single or double fan speed depending on the temperature. They are shown on the left (approx centre of the picture), with a close-up below. 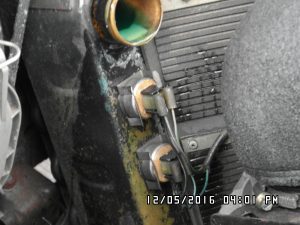 It turned out the switch seals were weeping. G then checked the seals on my own Virage, and they were leaking also.
It’s obviously a common problem and luckily easy to fix. There are two switches, both should have seals replaced.
AM Heritage have the parts, Part no. 32-15804 Bush (cooling fan switch). These must be the cheapest part available for a Virage at £1.58 each!

It only takes about 15-20 mins to do the job. First remove the top radiator hose. Then unclip the switches,  pull out the seals with the clip, push in the new seals, push in the switches, top up the radiator and job is done. No more leaks (from here anyway)! The seals appear to develop a groove due to continual expansion/contraction/age hardening and are marked ‘DO NOT REUSE’