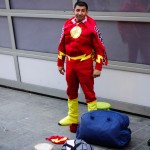 London life from April this year – shot round Soho and Waterloo

No question I am severely behind on this site.  I thought I had published these back in May, but on rootling around, I noticed they were still sitting here in draft form.  So now they get published although they they have been on my Flickr and Google+ accounts for some time now.

I continue to be impressed by the RX-100 camera.  It’s been lightly superseded by the mark II version (which has essentially the same image quality), but still remains the most pocketable enthusiast camera around.  I have now found a Sony drawstring bag (from a sony flash unit) that fits it perfectly, and allows me to genuinely put it in my trouser pocket while walking around and keep it protected.

What’s been occupying me during the late spring and summer though is a new Sony, the NEX-6, which has drawn me into a frenzy of lens and camera buying, plus lots of testing.  I’ll publish a bit on that in the next few weeks, but for now here is the latest set from the little wonder. As usual, if you have Flash the photos are best seen in full screen (press FS in the bottom right hand corner), and in slide show ( press SL).   If you don’t have Flash, i.e if you are using an Apple iPad/Pod/Phone, or a Nexus 7/10 tablet, or any Android tablet running 4.1 +, you can now see them as well.  Just click any of the thumbnails and a full screen slide-show should start. Information on each photo can be seen by clicking on the ‘i’ symbol in the upper right corner of the screen show.

Today’s photo:  Boat and mill at Nalliers. An abandoned fishing boat tied up opposite the old mill in Nalliers, in the Vienne area of France. The river Gartempe cuts its way through some very attractive country, and it is studded with villages like Nalliers at it’s crossing points. Shot with my new Olympus E-M5 Mark…

For years I have been wanting to go on the Otter trail – probably the most famous trek in South Africa, and certainly one of the world’s great coastal trails.  Thanks to some great organizational work by M*rtin, four of us walked the trail last week.  A magnificent experience, with great company, and incredible seascapes. …

Third Installment of Myanmar photos from Inle Lake.  This time the amazing fishermen and the stupas of Indein   Boatmen that don’t have an engine in their craft adopt a curious one-legged poling method in Inle.  One of the earlier shots in this series shows the boatman at the Treasure using it.  The Inle fishermen…