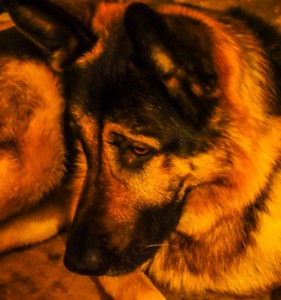 Some photographs by way of a change of subject from technology.  These shots are of the gorgeous English Dales countryside on a trip to Aysgarth Falls, during one of the wettest and stormiest periods in recent memory, so everything was green and wet (except Norman).  Very English.

As is our wont we spent the new year with G&J at their fairly remote place near Skipton at the foot of the Yorkshire Dales.  Unusually, the Chickadee was with us, and the ladies had a huge time dressing her up and generally spoiling her enormously.  It rained and rained, and this raised the rivers in the Dales to really high levels.  The Chickadee was to be taken up to an even more remote location in the North Yorkshire Dales for New year’s eve, and so the DLW and J drove her up in a 4×4.  En-route the level in the rivers was almost at the height of the car window on some walled roads, so the journey was a little scary.  Aysgarth falls that day looked awesome apparently – this is not a high fall, but it is wide and long, and the volume was thunderous and massive.  After the rains ended, on New Year’s day we went up again.  This time the falls were quieter but still impressive, and the sweetness of the countryside after the drenching was a thing of joy.

As usual (if you have Flash), the photos are best seen in full screen (press FS in the bottom right hand corner), and in slide show ( press SL).  Titles can be seen by pressing the ‘i’ in the top right corner, and to get back here, press ESC.  If you don’t have Flash, i.e if you are using an Apple iPad/Pod/Phone, or a Nexus 7 tablet, or any Android tablet running 4.1 +, you can now see them as well.  Just click any of the thumbnails and a full screen slide-show should start.