A few final seascape shots from Cape Town using the ability of the RX-100 to capture long exposure times, and hence render the sea in interesting ways.

A bit of technical jiggery is associated with these shots, so you can skip over the next section to the end if you only want to look at the photographs.

In a previous post I mentioned a Threaded Adapter Ring, which enables lens hoods and filters to be quickly attached to the camera.  Using this, I have been  experimenting with high strength Neutral Density (ND) filters.  These are effectively sunglasses for the camera.  They reduce the amount of light coming into the camera, while preserving colour and gradation (unlike my sunglasses come to think of it).  They have a number of uses, but generally are used to facilitate long exposure times that would otherwise result in overexposure of the scene  Long exposure times have a number of uses – the one explored here is the ability to smooth (blur)  the appearance of moving water while keeping static items like rocks very sharp. 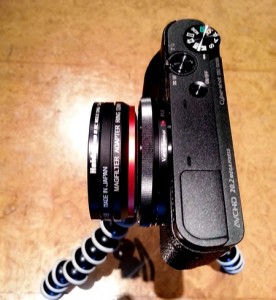 To do it without going over the top, I used two powerful ND filters that when combined, reduced the light getting through by 13 stops, or a factor of 8000x.  That then took the exposure required from hundredths of a second, to 20-30 seconds.  I used a Hoya 3 stop NDF combined with a Haida PRO II 10x NDF.  Despite being quite bulky they fitted on the little Carryspeed ring very well (see left).  The magnetic attachment was a real boon, as it enabled me to flip the filters off to set up the framing at normal exposure, then flip them back on again for the long exposure shot. 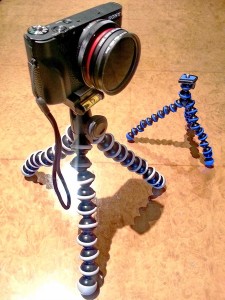 Getting long exposure shots in which the static objects remain in focus of course requires a tripod.  It sort of defeats the object to carry a hulking great tripod around when you have a tiny camera like the RX-100, so I have settled on the Gorillapod from Joby.  The original version of this is tiny and rather flimsy, although it’s small and fits easily into a shoulder bag.  The one I used for these shots, is the Hybrid model, which is vastly more robust and stable, and has a bubble level gauge and a ball head.  It is designed to hold up to 1kg, so is pretty solid with the RX-100.  You can see the full system on the left, with the original Gorillapod next to it for comparison.  By the way, there are many knockoffs available – they seem to fail fairly quickly, so I would recommend the original Joby versions.

OK, finally, here are the shots.  They were taken at sunset off Noordhoek beach at the bottom of our road in Cape Town.  I set the tripod on the massive granite rocks and used exposures between 10 and 30 seconds.  There was a pretty stiff wind, and that was the main factor affecting the crispness of the shots.  Still, for a first attempt, I was quite pleased.

As usual, if you have Flash the photos are best seen in full screen (press FS in the bottom right hand corner), and in slide show ( press SL).   If you don’t have Flash, i.e if you are using an Apple iPad/Pod/Phone, or a Nexus 7/10 tablet, or any Android tablet running 4.1 +, you can now see them as well.  Just click any of the thumbnails and a full screen slide-show should start. Information on each photo can be seen by clicking on the ‘i’ symbol in the upper right corner of the screen show.

[singlepic id=2 w=534 h=400 float=left]This Spring in Cape Town I got back into serious photography after a lapse of many years.  My focus in the last 10 years or so has been in compact cameras – following the incredible recent technology curve of sensors and lenses.  My main interest was in capturing mountain panoramas,…

In my last post I described a new approach to showing images from Himalayan and other treks.  Using that approach, here are a selected set of photographs from the very fine trek to Nar and Phu that my friend J*y and I did in spring 2009.     A brief word about Nar and Phu first. …

Some photographs by way of a change of subject from technology.  These shots are of the gorgeous English Dales countryside on a trip to Aysgarth Falls, during one of the wettest and stormiest periods in recent memory, so everything was green and wet (except Norman).  Very English.     As is our wont we spent…

I have wanted to take this shot for a while after having noticed the effect a year or two ago.  The viewpoint is from Kommetjie looking across the bay to Long Beach where the horses are exercised in the morning.  I liked the idea of appearing to see the riders as though from a boat…