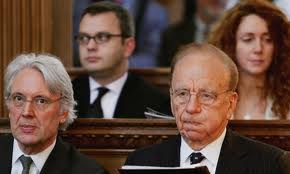 OK it’s schadenfreude, but it is enjoyable

This was not intended to be a site that included topical commentary , but it would be remiss of me, if only for my own historical records, to fail to note how deeply satisfying it is to see the various parts of Murdoch’s empire start to catch fire.  An organisation that was pitiless in it’s press and TV attacks on parties, individuals and institutions, and that could host inside it the travesty of impartial reporting that is Fox news, absolutely deserves the relentless kicking it is getting now.  Indeed it deserves a kicking of even greater brutality, and I sincerely hope it will receive it for a good long time to come.

Looking back, it was an incredible achievement in keeping this thing under wraps for so long (11 years by some accounts).  If only Nixon had had Murdoch at his side, Watergate may have turned out quite differently.  In my humble view, two key things happened that split the whole thing irrevocably apart for Murdoch.

The first was that at the end of June, the whole country had been horrified at the injustice of the Milly Dowler trial, and the ordeal her parents and family went through during it at the hands of Levi Bellfield’s barrister.  The egregious wrong-doing of News International up to that point was still amazingly poorly covered in the general press, and was not a national issue for most people on the street.  It took  the revelation in the first week of July of their hacking of Milly’s phone, to cast the News of the Screws as the heartless grasping scum  that they undoubtedly were, and set the whole thing alight.

And the second was that Ed Milliband, the Labour leader saw a golden opportunity for a counter coup against David Cameron, the prime minister.  Cameron’s vulnerability through having been a known friend of Rebekah Brooks, through having hired Andy Coulson despite warnings from the Guardian amongst others, and his apparent fast-tracking of the BSkyB merger approval,  made him a target for Milliband for the first time.  Milliband, who has been the butt of Cameron’s scorn and contempt in parliament, saw this as a key moment to puncture Cameron’s apparently bullet-proof mantle, and took it.

With Cameron on the back foot, introducing a judicial enquiry and turning against Murdoch also, the game was fully up.  The trickle of revelations is turning into a flood, and the arguments between the erstwhile legal team and senior executives of News Corp, plus the presence of hundreds of p*ssed off News of the Screws staff, eager to tell the real story means that this will run for a while, and hopefully draw in the Sun and the Times also. Couldn’t happen to a nicer bunch of guys, even if few others emerge with credit from it bar the Guardian and Nick Davies.

In the same week as this took place,Tony Blair pontificated on the Death of New Labour, and attributed it to Gordon Brown.  That irrelevant assessment prompted a superb letter to the Guardian from Julian Batsleer, which in turn prompted me to write this piece, and which I hope its author will not mind me quoting:

• Tony Blair thinks New Labour was born when he became party leader and died when Gordon Brown became prime minister (Report, 9 July). I think we can date the birth and the death of New Labour more accurately. Born in February 1995 when Tony Blair went to Australia to speak at a News Corporation conference; began to breath its last (hopefully) in July 2011 when Ed Miliband called in parliament for Rebekah Brooks’s resignation.

Exactly.  Milliband is an unknown political quantity, and his performance has been lacklustre and rudderless up to now.  And I have no expectations of any principled flowering or renewed relevance of the Labour party again.  But at least in his own small way, Mr Ed did help to kill off two dragons with one sweep of his little sword.