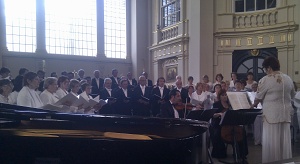 The French choir Choeurs au Diapason hail from Marseilles and are around 130 in number.  Even in France the sight of 130 massed French people causes an Englishman concern.  To see this number dressed in white (the women), or in full evening dress with white silk bow ties (men) jammed into the chancel of St Martin’s in the Fields was verging on startling.  They were led by the redoubtable and talented Mme Annick Deschamps, who both conducted and sang, in the latter role actually conducting the choir by waving her arms behind her back as she trilled towards the fascinated audience.

Their programme was eclectic and superbly performed, particularly by the bassos of the massed male voices. Touchingly they included a rendition of ‘Jerusalem’, as a tribute to the newly married Royal couple.  Hearing the almost exclusively monolingual French choir belt out ‘and deed zoze feets in ancien times’ was a real tonic,  and they delivered it in style, albeit one suspects without complete understanding of what they were singing.

The conclusion of their program was an electrifying rendition of the spiritual ‘Freedom’, embellished with haunting colouring by Mme Deschamps, which brought them a standing ovation, as did their encore of a dramatic piece from the Carmina Burana.  A cracker of a performance; 40 minutes of style and brio from true amateurs of song.  I enquired at the end if they were staying on in London; no, they were leaving immediately, almost certainly I felt to escape the horrors of British cuisine. Their job was done.