Announcers at the beginning of concerts quite rightly request all phones and things that beep to be switched off. What they don’t, and in my opinion, should request, is that no-one coughs. I am continuously amazed by the fusillade of barks, hacks and full-throated clearances that rattle around most London concerts, not just in the inter-movement gaps, but right in the performance. At times, it as though a special party of acute TB sufferers has been coached in.

A better solution for the rest of us would be to introduce a special subscription series for the coughers; the ‘catarrh concerts’ perhaps. They could be provided spittoons, so that the music could be further punctuated by the clang of mucus gobbets hitting the sides. Given the incredible propensity of UK audiences to fill up with slime before coming out, there would be several bathtubs full of the stuff by the concert end. It could be perhaps used for a specialist cappuccino froth for their post-concert coffees. 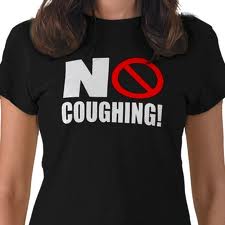 Then the rest of us could enjoy the music. It’s completely possible to cough silently. It involves some effort, but why not; it takes some effort not to urinate if caught short, but we don’t pee on the seat in front – we clench and we wait (and clench again). At a jazz concert in France last month, no-one coughed. It was wonderful, and civilized, and for once my enjoyment of the music was at the discretion of the artist, not some mucus-flecked scrote, hacking his phlegm and his germs into the atmosphere.

It’s a faint hope; instead, at concerts, I say to myself ‘just enjoy the beauty of the sound of live instruments, don’t expect it to be perfect’. But it could be perfect so often, with just a touch of consideration. Failing the segregation of the hacking brigade, I am working on a special device, to be clamped to the head of the more bovine and easy-going coughers. It will soundlessly collect the slime, and port it into a colostomy bag strapped to their ears. My working brand-name is The Phlegmatic.

A once-in-a-lifetime experience listening to a very unique instrument. In a previous post I wrote about a performance of the St Saens ‘Symphony with Organ’ at the Albert Hall.  In researching that instrument, I learned about the organ at the Abattiale de St Oue, in Rouen, which is held by many to be one of…