I have always liked the Jayhawks – one of those bands that should have been bigger, but would probably have been worse as a result. The essence of the Twin Cities-based band was the close harmony between lead guitarist Gary Louris, and Mark Olson. Their high point was between 1992 and 1995, when they made two seminal albums – Hollywood Town Hall (1992), and Tomorrow the Green Grass (1995). At that point Olson left, to marry and take care of a folk singer named Victoria Williams, who had been diagnosed with MS. In a typical dead dog story, (really worth the click to read) Olson and  Williams split up in 2004, and by his own account, Olsen then drifted for a long while.  Last year the entire original band reformed (including keyboard player Karen Grotberg),  and they have been touring this year.  I had never seen them live before, but last Friday (on a night I have been looking forward to most of the year)  they played the Forum in Kentish Town, and were just.brilliant.

The warm-up act is usually an opportunity to get some drinks in, catch up on news with your companions, or leave the hall completely if too loud, but this warm-up act turned out to be pretty good.  After a while I remarked to A**dy, that they sounded incredibly like the Jayhawks.

And indeed it turned out to be Mark Olsen himself, accompanied by the generously-proportioned Norwegian singer and musician Sailorene (aka Ingunn Ringvold).  They were so good, I would go to see just them again when next in UK.

Olson. Ringvold. Grotberg.  Digressing for a moment, these are all folks of Scandinavian origin, as are very many people from the twin cities, and Minnesota in general.  In the unanswered questions department this has always puzzled me.  Why would poor emigrating Scandinavians in the 19th and early 20th century cross the Atlantic, and then trek thousands of miles to end up in a place just as cold, dank and miserable (in the winter at least) as the place they had just escaped from?  Why not North Carolina, or Georgia?  Ah well. 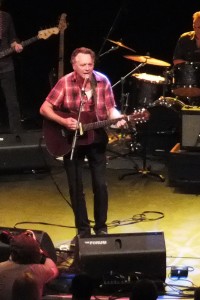 Anyway the full Jayhawks followed, and were terrific, Olson and Lauris in full harmony, supported by the surprisingly sweet-voiced drummer Tim O’Reagan, and Karen Grotberg.  The sound system was a bit crap, and voices were mixed too low, getting drowned by the guitars, but no matter, it was just wonderful to hear all those great songs played live. The packed audience was mostly staunch fans of the band, and the rapturous response to their greatest songs really helped the atmosphere. Olson was in great voice, surprisingly after singing a whole set  as the warm-up – and confirmed my view that he was always the centre-piece of the band. 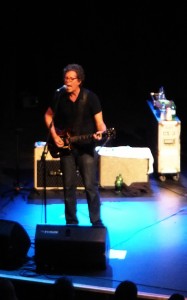 That’s not to downplay Gary Louris, whose guitar, along with Grotberg’s keyboards, helped to define the Jayhawk’s sound. Listening again, almost every song can be identified by the opening riff, and he played some nice solos – if a bit loud due to the mix. Drummer Tim O’Reagan also did a lovely song in the middle of the set, although he was not on the original two key albums.

So as you may gather, a gig I really enjoyed.  A note on the venue: the HMV Forum has a great advantage for those who don’t like standing all night.  The upstairs balcony has unreserved seating, and pretty nice plush bench seats, well raked, so that everyone gets a view.  It’s a small venue so you are not too far from the stage, and with a quiet bar behind, it makes for a fairly civilized evening.  The main downside is that they don’t allow any liquid or food in the place, and search you on the way in to enforce this – as regrettably many big London venues do.

I mentioned the camera in the tag-line at the top.  This was the first gig I have taken my new Fuji F900 EXR camera to.  It’s a pocket camera, about the size of an original iPod, with some  clever CMOS sensor design (EXR).  This optionally adjusts the pixel array used for high speed, low noise, or dynamic range.  I won’t use flash or a tripod in a gig, so need to shoot at high ISO to get any reasonable shutter speed to allow hand holding.  Using the low noise EX setting, I found the camera produced pretty nice shots at ISO 1600, with few noise artifacts.  As a result I could get shutter speeds of 1/25 to 1/60th, very useful in a dimly lit venue, and enough, with the anti-shake in place, to overcome the telephoto blurring effect.  More on this and other cameras in an upcoming ‘on Portability’ piece.

I don’t video or sound record concerts,  but others have, so here are a few YouTube links to classic Jayhawks songs in case you have not heard the band before.  Firstly,  ‘Take me with you’ from Hollywood Town Hall, and then ‘Blue’ from Tomorrow the Green Grass  –  both recorded around ’95 I would guess.

I was curious about Mark Olson, who seems a really nice man, and his departure in 1995, so I looked up his ex-wife Victoria Williams and came across this lovely quirky song and video, recorded with Tucson-based Giant Sand in Joshua Tree, where she still lives.  I can see why he was a bit sad about losing all this (although he still lives there).  Jayhawks songs have always been a bit more than great pop or country tracks, although they are that also, and they do seem to affect many people quite powerfully, as witnessed by the audience in Kentish Town on Friday, and in this elegiac piece I happened upon while researching the post.

A new Jayhawks album is promised for later this year – which might be worth interesting to check out – but even if it doesn’t come up to snuff they always have the legacy of two of the finest albums of the 90’s to their name.