Apple’s all-out assault on Android around the world is Google’s biggest problem by far.  And on the day that Steve Jobs retires, it’s looking bad for Google/Motorola, Samsung and HTC.  Very bad……

In the last post on this subject, I covered Google’s problems with Oracle, and noted that the Apple situation was likely to be worse than Oracle, or Microsoft, or Linux.  Why so?  Well this is because while MS want a reasonable amount of money, and Oracle want a lot of money,  that’s so far where it rests – it’s just money.  Oracle is indeed asking for an injunction, but it seems to be as a tactic for extracting the largest proportion possible of the $6.1Bn they are demanding from Google.

Apple on the other hand, do not want money.  They want to stop Android completely, or rather to stop the main vendors of Android, principally Samsung, from shipping.  Their approach is uncompromising,  brutal, and interestingly, world-wide.  And whereas the other litigants are using patents as a sideline revenue collection opportunity, for Apple, it is part of the mainstream sales campaign.  Stopping Samsung shipping in US and Europe, has a huge, and direct impact on Apple revenue and profit, and hence the company valuation.

For Google, having the world’s largest tech company, and the world’s second highest valued company overall, gunning for you as part of their core go-to-market strategy is a rather bad place to be in, particularly if you are vulnerable to the validity of their patents.  Moreover, cutting off your key competitor at the throat is incredibly cost-effective for Apple; while lawyers are not cheap, they are cheaper than the marketing cost to compete against Samsung.  And no matter how pricey it gets, Apple can afford it; at the end of June they had $76Bn in cash, more than the US government at that time!

Apple’s prime attack on Google, is via Samsung, Motorola and HTC.  We’ll look at them one by one, but not, you will be pleased to hear, in mind-numbing detail. 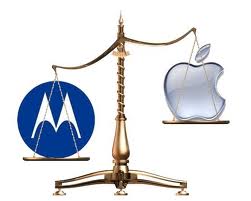 Motorola:  In October 2010, aware that Apple was about to file suit, Motorola filed for infringement of 18 patents against Apple.  Apple responded over a period of a few months with 24 of it’s own, giving a total of 42 in play at the moment, across 3 US states and the US office of the International Trade Commission (ITC).  The number of patents involved don’t tell the story.  As related by the excellent Florian Mueller, Motorola is doing very badly in this battle.  Apple’s suit against Moto comes to trial at the ITC with a proposed date of March 5th 2012, and Moto have a strong chance of losing that one.  Moto are unlikely to even get a trial date on their suits until 2013.  By that time there is a strong chance they will be prevented from shipping Android products into the US.

In addition, it was recently revealed that Apple has a Europe-wide injunction in process against the Motorola Xoom in Europe, in the same court that recently granted the Samsung injunction.  This might stop shipments effectively world-wide.  In the bru-haha about Google’s acquisition of Motorola Mobility, lots was said about how smart they were, to be buying all those great Moto patents.  Hmmm.  Well it looks to me like Google have a) bought themselves a direct war with Apple, and b) may have paid $11.4Bn for a company that cannot prevail in a patent dispute with Apple, and c) may not be able to ship any Android products from 2012 onwards.  Not in my view a great bargain.

Samsung;  You think Apple is playing tough with Moto.  Against Samsung, they have 19 lawsuits going on in 12 courts in 9 countries on 4 continents.  Famously, on 9th August, they secured an injunction against Samsung on a EEC-wide design infringement (i.e not a hardware or software patent). This immediately created a stop-ship on all Samsung Android-based Galaxy Tab 10.1 products in every EEC country except the Netherlands (but see below).  However, on August 16th this was halted for all countries except Germany, pending the full review, which starts today (25th August). In Germany, Europe’s largest market, Samsung are still prevented from selling the Tab 10.1

On 24th August, Apple also secured an injunction against Samsung on a software patent in the Netherlands.  This injunction has a Europe-wide effect against product shipped from that country.  Since Holland is where the Samsung logistics centre for Europe is located, this will cause Samsung a problem.  However, the injunction does not come into effect until September, giving Samsung plenty of time to switch from Netherlands for distribution (although probably with some tax penalties).  The injunction was granted on a single software patent – relating to the way images are flipped in a photo gallery.  This is an example by the way of Apple’s fairly unprincipled use of patents as a means of attacking a competitor.  Image flipping in an app buried in one of Samsung’s phones, can hardly be described as a mortal wound to Apple’s rights – but it is being used to stop shipment of an effective competitor.  Samsung also is suffering an injunction leading to stop ships in  Australia.

It looks bad for them, but Samsung is doing better than Motorola, despite being hit early in the battle.  Samsung owns about 28,700 patents in the U.S. alone and huge numbers of patents around the globe, so it can fight back, and certainly has the resources to do so. It is reportedly changing the offending software to prevent the alleged infringement, and also has succeeded in getting many of Apple’s patents (like the slide-lock patent) judged as invalid, and therefore incapable of being infringed.  However, they have lost millions in sales already, and the war will be long and drawn-out.

HTC: One of the original smartphone makers, and a personal favorite of mine in the technology stakes, this company has entered a world of trouble after starting to ship Android on its smartphones.  Already paying MS a license fee rumored to be $5 per phone, they are reeling after a fierce attack from Apple.  Apple have two separate cases against HTC at the ITC involving 15 patents, plus another suit in Delaware.

Graphics company S3 recently won a case against Apple at the ITC, and HTC quickly moved to buy them for $300m.  However, the trusty Florian is clear that these patents will have no effect against the iPhone, or iPad, and at worst, may only force Apple to use a different graphics chip in the Mac. As Foss notes, HTC has a minimal patent portfolio, and is no Samsung.  Moreover, they have already lost the first round against Apple.  In July, the ITC issued an initial determination that HTC infringed two of Apple’s patents.  If upheld, they could suffer stop ships into America, and their defence appears weak.

Google has publicly said they will ensure HTC does not lose,  thereby elbowing their way into yet another legal dispute with Apple.  But it seems very likely HTC will lose, and it is also unlikely that if they do Apple will not allow them to license.  They will instead enforce a stop ship.

Summary;  Thank goodness that’s done.  This kind of summary, as far as I know, does not exist on the web elsewhere (as of now anyway) – a great deal of work has had to be done on Florian’s site and others to gather the bits into a single view.  But at least it’s finished.

I’ll wrap up what this means for Google more fully in the next post, but taking this and the prior two posts together, it’s clear that Google and Android have huge problems, with a range of attackers. The Moto acquisition clarified only one thing.  It turned Android from being a possibly quite pricey issue for Google’s partners, to a hugely expensive problem for Google itself.  If you add all the suits together, plus the Moto costs, this could result in a bill of up to $20Bn for Google, plus world-wide stop-ships for all their partners.  Wow.  That’s an expensive business model.  And their usual approach of ignoring other people’s IP is coming back to haunt them in new and powerful ways.

More in the next (and last) post on this subject.