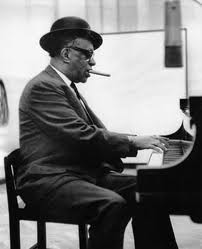 Stride piano.  Something that you don’t hear every decade.

The second album I ever bought, (after Astral Weeks), was called ‘The Jazz Piano’, and featured Willie ‘the Lion’ Smith, as well as Art Tatum,  Earl Hines and many others.  All those three were great exponents of stride piano, a genre that is almost never now played.  Stride came after ragtime, and boogie-woogie, both of which I find hard to listen to (because of the film ‘the Sting’ and amiable prat Jools Holland respectively).  But stride I could listen to all day.  Well maybe all morning.

Stride featured a rolling left hand that alternated a bass note and a chord, coupled with a right hand that could go all over the place, but because of it’s structural simplicity no modern jazz players bother with it, to the extent that in 30 years of going to live jazz, I’ve never heard it played.

To my surprise I did eventually hear some live this week, played by the UK’s greatest living exponent, the nicely-named Neville Dickie.  The atmosphere was about as far from authentic as possible, in a London Church, with a crowd of aged, and possibly deaf parishioners, but Mr Dickie did the genre proud.  He even made some ragtime and boogie sound interesting, largely by demonstrating how small chordal and rhythmic changes in the left hand created the progression  between the genres.  It would have been  way better in a raucous bar somewhere, and I hear Mr Dickie can occasionally be found at these kind of establishments also.  That’s where I’ll go to see him next.

In the meantime, here’s a YouTube clip of Mr Dickie demonstrating the difference between stride and boogie, and playing some great stride.  And to see how the original masters did it, here’s a link to some stride being played by Willie the Lion.  It shows his left hand really striding.

* A title lifted quite discreetly, from occult writer Denis Wheatley**

** Further purloined, some will see, from noted author Hilaire B***

*** A line he stole with subtle daring, from Wing Commander Maurice  Baring.

# There is no evidence whatsoever that Mr Dickie is nicknamed ‘the Devil’.  But it makes a better photo caption.