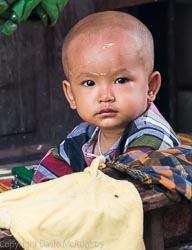 On to Mandalay – with some street shots of market traders and world rulers, plus the wonderful U-Bein Bridge

We had heard mixed reviews of Mandalay, and we left the city with mixed feelings. One thing is for certain – it is not the exotic and romantic spot immortalized by Kipling.  It’s a very busy, largely concrete-built city with intense traffic, and relatively few facilities for western tourists.  Before we had even arrived at our hotel we resolved to fly out as soon as we could, and we booked a flight the following afternoon.  The next morning however, we went to the wonderful U-Bein bridge at dawn, and then on to the north of the city, and particularly  the Kuthadaw Pagoda, site of  the biggest book in the world, and started to regret our early departure.  I think I would go back, but would stay on the northwest of the city, nearer the huge fort and Mandalay hill.  As ever the people were charming and helpful, and in this section I started to concentrate on them a little more.  Information on how to view these photos is at the end of the post as usual.

Back in the warm south thankfully.  Here are a few photographs of the area immediately around our place in the Southern part of the Cape peninsula.         It’s late summer here, a lovely time when the winds ease, and the days are long and languid.  This year I only brought the little…

Today’s photo:  Blue and Gold. A long exposure shot taken near Simonstown in the Cape Peninsula, as the rising morning sun illuminated the jagged sandstones of the False Bay coast.  A further by product of my endless (and so far unsuccessful) attempts to capture effectively the sun rising behind the False Bay lighthouse.  These attempts…

Some more London street shots – now working on closer shots with wider lenses   There are of course vastly more than enough street photographs of London, so there ought to be some rationale for my taking and publishing even more.  The usual justification is that they are taken from one’s own unique point of…

Some high speed telephoto shots of the South African’s herculean and ultimately unsuccessful efforts to win the final Test of the series. My chum M*rt*n is, as you would imagine, both a member of Lords, and of the Newlands club in Cape Town.  Newlands has to be one of the most spectacular grounds in the…

Today’s photo:Smoke. In between the extended periods of summer rain the English like to take their kit off, and lie sparko in the parko having a nice smoke. Shot last summer in the little park adjacent to the Oxo tower in London’s South Bank. I liked the guy’s expansive smoking style, his impressive tattoo and…