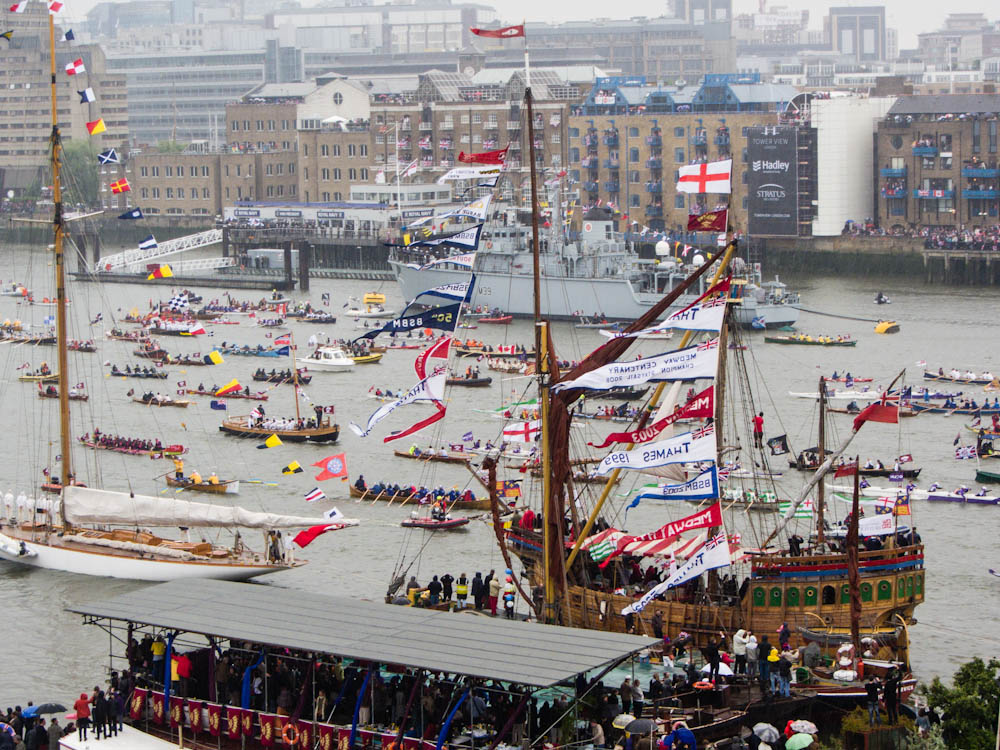 A magnificent day on Sunday the 3rd, as we watched the amazing Thames Pageant.  I don’t get excited often these days, but I was genuinely thrilled by the event – which displayed all the bonkers flair for procession and stoicism in the face of continuous rain of the British.

Even hardened republicans were out, and the dismal weather only seemed to make the thing more British somehow.  M* has a splendid apartment right next to Tower Bridge, with access to the roof, and generously hosted a jubilee party complete with bunting and flags.  From there we could see up the Thames, through the drawn bridges of Tower Bridge, as the boats approached.  Amazingly, the Royal barge tied up right opposite us, so we were able to watch HRM (directly and on television) while the rest of the flotilla bobbed past.  The height of the upstream bridges meant that only small boats could participate (the bigger ones were all moored in front of us), and so there was the slightly nutty sight of the royal family in full regalia looking down as a series of dinghies, canoes and rowing boats weaved chaotically past.  At least that way they could look down on the flotilla  – bigger boats and the scale of the thing would have been all wrong.

It all ended as a barge carrying and orchestra and singers playing ‘Land of Hope and Glory’ hove to in front of the Royals, and as a finale, accompanied by the crowd, played a rousing ‘God save the Queen’.    A brilliant day.  For those of us who are 60 this year, the Queen has been a constant presence, and whatever our feelings on the monarchy, you could not help but feel affection and admiration for her.  It made me wonder and fear a little for the future – she’ll be gone soon, the eurozone will collapse, and bigger changes will happen to all of us individually.  Without realizing it, the Queen has been a critical bit of stability and calm in our lives, and I think we will miss her sorely.

Ah well. Here are some photos of the event, taken with  my new Canon SX220, with hacked firmware.  It was a very very dull day, and so getting some contrast and colour impact out of the shots was difficult.  But it seems to have worked quite well.  I’ll be covering this camera some more in my next post ‘on portability’.  In the meantime, the snaps.  As ever, they are best seen in full screen (press FS in the bottom right hand corner), and in slide show ( press SL).  Info on many of the photos is available by pressing the ‘i’ in the top right hand corner (and press ‘i’ again to get rid of it).

Today’s photo:Getting the bread. This shot was taken in Nalliers, on the river Gartempe in the Vienne region of France. The old gent was notably wobbly on his bike, and seemed to be heading out to get his morning baguette. Note: Click photo to enlarge – back button to return.  This now works for the…

Just beyond these rocks is where the Noordhoek surfers go – it was pretty wild the other night – too dangerous for surfing, and too dark.  But I couldn’t help but be impressed by the power of the waves.  Capturing them is always an experiment in time.  A very long exposure (like my favorite 4…