A few observations from the parallel world that is rural France.  Including a literal example of snailmail, the age of the house, and our gorgeous new walls. 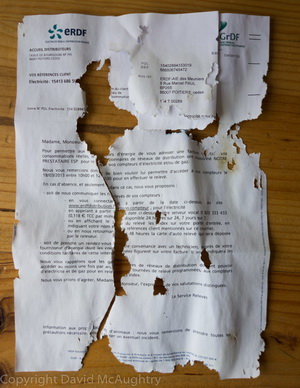 The mail delivery service is one of the wonders of rural France.  Every day the little yellow van delivers more useless brochures from French supermarkets, along with white buff envelopes bearing new examples of how the bureaucracy can mis-spell my surname.  The mailbox is occupied permanently by a family of snails, and despite our efforts, they remain in situ and feast daily on the useful meals dropped in from above.  They actually disdain the colour brochures, and vastly prefer official documentation.  An example is shown to the left.  As you can see, deciphering the original content can be quite a challenge.

The place we have owned for the last 17 years or so is a traditional “fermet” or small farmhouse.  In its earliest form it was a solid squat building made of 2 1/2 ft thick stone walls, with an attached sheep or pig byre. Upstairs in the fermet  was a hay loft under a low roof.  Some time later a large barn was built, and later still an extension was built on to the barn.

The main house has “1811” scratched on the stone lintel over the front door.  On the extension to the barn is scratched the date “1919”.  So the house was first constructed at the apogee of Napoleon’s success, the year before the disastrous Russian campaign, and 4 years before Waterloo.  Everything must have seemed possible for France that year, as it ruled Europe and by extension,  the world.  The final structure was built the year after the Great War ended, with enormous numbers of France’s young men slaughtered in the trenches to the north-east, and with a portent of further doom to come.

On both dates though, the heart of France was its agriculture – and this fertile and central area was both economically important and picture-book gorgeous by all accounts.Our neighbors have lived all their lives in this hamlet, and our great friend Mme B, in particular has told us of her early life here.  She was born in the 30’s, at a time when people didn’t travel much.  Visits to St Savin, our local town, were rare, and mostly for monthly markets or fairs.  People stayed where they lived, and as a result the area was peppered with boulangeries, butchers, wheelwrights, hotels, bars (and even a dance hall!) in a profusion that is hard to grasp today.  The roads verges, now kept clear for field and road access, were lined with walnut trees and Mme B remembers gathering them in Autumn for the making of Huile de Noix and for eating fresh.

The population in the 1930s was twice what it is now – and given they were mostly out working in the fields all day it must have seemed very busy. Now in the 15 kilometer stretch from St Savin to our nearest village, there are only two premises remaining, both bars and both largely empty, where before there were dozens of shops.  Oddly the area is quieter now than ever it would have been when our place was built and thriving.  Only the occasional car on the distant road is heard – and that’s actually one of the reasons we love it so much.

When we bought it in the ’90s it had just been restored by a delightful Armenian gentleman and his English partner.  They were both of advanced years, but the conversion he had done was charming and idiosyncratic.  Over the years the ravages of weather and time plus the eccentric nuances of the original DIY meant that we had finally to undertake a major renovation, which has been under way for the last three years.  We are almost at the end of the major work  of rebuilding of the verandah, the main house roof and the whole of the upstairs of the house.  It has been an expensive and somewhat frustrating journey, but we are at last on the verge of moving back in.

Our experience of the local French trades has not been at all good, so we have moved to using registered English craftsmen including a great mason, Graham Painter (details available on request).  He is currently at work rendering the walls of the old barn – using the traditional ‘pierre-a-vue’ render, which protects the wall but leaves the faces of the stones peeping through.  The original stone-built barns were never intended to be as weather proof as the houses, and although the walls are still monumentally thick, they were more than a little rough.  The facade of the barn wall facing our land is now complete and lovely.  Here’s a shot just after it was done. Its darker on the right because the render is still drying.

The roof doesn’t look that big in the photo above, because of the angle of view and the lens used.  But it is huge, not least because it covers both the original barn structure and the new atelier, which is facing you in this shot, and which is where we have been staying for the last 3 years (and very cosy it is too).

The front face of the barn, shown below, is being done now, and when finished will transform our courtyard. 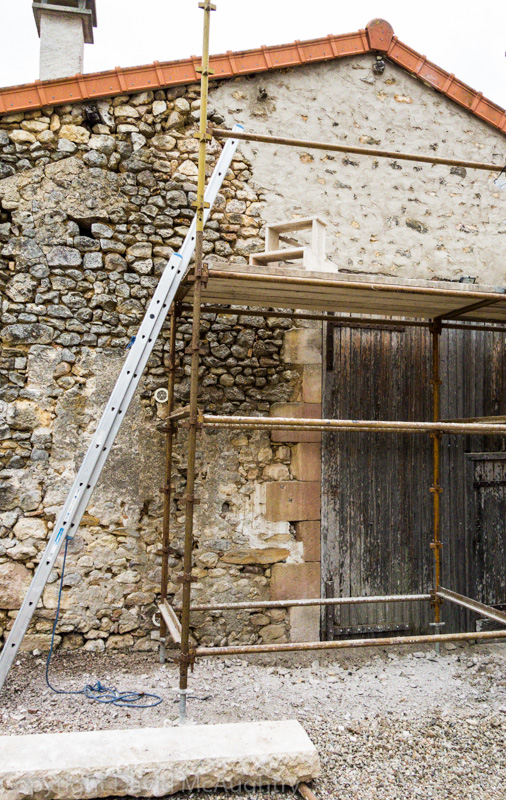 You can get some idea of how rough the walls were from the area to the left.  The new area is at the top right.

The huge lump of stone at the bottom left is the lintel for a new door opening in the main house.  Watching it being moved around gives me some idea of how the pyramids were built.  But you need something weighty to support 75 cm thick walls.

One day all this renovation work will be done.  By then we will be probably the same age as the people we bought it from 17 years ago.  But no matter, the little fermet will outlast us, and many more generations to come, and will  keep giving pleasure and shelter in equal measure as it has done for over 200 years.

On the plane back to KL  there were a few moments to reflect on what is happening to Bali.  Always a favorite place, we just had one of our best ever times here, celebrating the *0th birthday of our  dear friend M**k, along with the chickadee and her hubby.  But it may be one of…

Very minor modification to the plan to skip lunch today. The miniature hip-bath of fois risotto was what swayed me. Total cost – 6 euros.   This is at the Palace of FBT, the Mercado de San Anton. (Visited 10 times, 1 visits today)

Those that prefer plants turn your eyes away now – This steak is medium rare! We finally got to sit down at the Chickadee and hubby Mr K’s steakhouse last Friday, and a very pleasant evening it was too, defined by the awesome steaks and other fine food on offer.  Shown above is the 1kg…