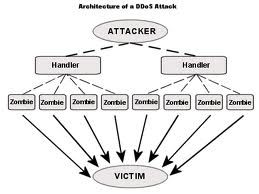 No doubt to signal their displeasure at the public money about to be wasted on Mrs Thatcher’s funeral, some b*st*rds somewhere are mounting a huge attack on WordPress sites, of which this is one. This is the reason the site has been slow or impossible to access  in the last 24 hrs. A little tinkering has fixed the problem for this site, but not I fear, for many millions of others.

I was surprised not to be able to access the admin interface to my web site yesterday evening.  Pinging my site host, I learned that they were under a massive Distributed Denial of Service (DDOS) attack.  These are malicious attacks mounted via zombie computers (maybe yours), that as shown in the graphic above, result in an army of hits arriving at a single site or network.  These attacks come and go, but it’s clear this one is in fact not going and I heard today that the attack  is world-wide, and truly massive.  The attack is targeting WordPress sites specifically, and there are around 30 million of them as it’s the premier platform for serious bloggers and many other web authors.  Basically the attack is hitting the admin interfaces of all these sites with zillions of fake logins, with the hope that some will succeed and allow malware to be installed on the site.  It also has the effect of bringing the hosting servers to their knees, and making access slow or impossible.  Double b*st*rds.

My site is secured in multiple ways against these attacks, and is not affected as far as security goes, but has been still suffering from the hosting network being snowed under.  The solution has been to re-route the DNS access via a specialised security server.  I won’t go into the ins and outs, but it should speed up access during this attack, and also thereafter, even in normal conditions.  It’s involved new DNS addresses being registered – and that takes up to 24 hours to propagate around the world.  So from tomorrow things should be back to normal.  Sorry for any delay in service in the meantime.

Of course it’s not clear why these b*st*rds are mounting this attack – but the humbug, and collective amnesia about the reality of Thatcher’s Britain, plus the travesty of a state funeral (which it is in all but name), seem as good a reason as any.

It may be a coincidence but at exactly the same time it has been alleged that a targeted attack has been mounted by supporters of the current Malaysian government against certain critical web sites, such as Hornbill unleashed, and Sarawak Report.  It’s not the first time apparently, but if true, hitting the world’s WordPress sites as well as taking down the voice of political opponents reaches a new level of b*st*rdiness.

I may return to these subjects again (assuming my fixes have taken effect).